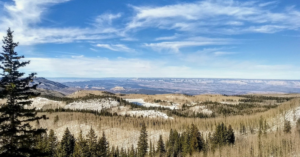 Mesa, CO is an unincorporated community and United States Post Office in Mesa County, Colorado. The ZIP Code for the Mesa Post Office is 81643. Mesa is located on state highway 65 on the north side of Grand Mesa, in what used to be known as Plateau Valley, and is under the Plateau Valley 50 District Public Schools.

The year after the Utes were removed from most of Colorado and confined to reservations for the final time, Mesa was established.

Mesa is on the Grand Mesa Scenic Byway and, between the I-70 and Cedaredge, is the only place along the road where you might find some snacks. Mesa is around 5,600′ in elevation, so the winters aren’t too bad. Powderhorn Resort is just south of here (and a bit higher, too): they’ve had problems keeping snow on the slopes in some years.

The Grand Mesa Scenic Byway runs along the western edge of Mesa. Between I-70 and Cedaredge, it’s the only place where you may get food along the road. This part of the Grand Mesa is an open, flat farming and ranching area. The winters aren’t too harsh because Mesa is roughly 5,600 feet in elevation.

The views around Mesa are pretty nice: you know you’re well above the surrounding countryside when you look north or west. To the south is that wall that heads up to the top of Grand Mesa and 10,000′ elevation. I came through on a Sunday morning in early September. Hardly anyone was moving, and the town was tranquil: nothing open for business yet.

This part of the Grand Mesa is an open, flat, farming, and ranching country.

Mesa, Colorado, is not where you’d live if you’re looking for busy streets, bustling traffic & city life. Instead, there’s plenty of peace here, with lots of work to be done if you own a farm or ranch.

If you’re looking for gyms, cafes, restaurants, and larger retail stores, Clifton & Palisade are less than 30 minutes away.

If you’re selling a home in Mesa, CO, contact us to schedule a 3D virtual tour!