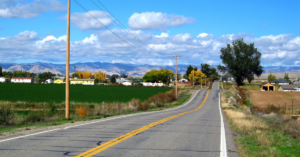 In 2019, the median property value in Loma, CO was $275,700, and the homeownership rate was 76.8 percent. The typical commute time in Loma, CO was 32.5 minutes, with most people driving alone to work. In Loma, CO, there was an average of 2 cars per household. Loma, CO Economy

On average, primary care doctors in Mesa County, CO see 891 patients every year, a decrease of 1.22% from the previous year (902 patients). When compared to dentists (1365 patients per year), and mental health practitioners (300 patients per year), this is substantial.

What are the best neighborhoods in Loma?

With a population of fewer than 1,000 residents, you’ll find more farms and ranches than you will in neighborhoods, but the neighbors seem friendly!

Loma, Colorado is home to four public schools that have received a good or higher rating from GreatSchools. 1 independent and charter school is also located there.

The town of Loma, Colorado is known for its extreme mountain biking trails. A tiny playground is included in the Loma Community Park, which measures approximately 0.5 acres.

The Bureau of Land Management administers significant publicly owned land around Loma, which is primarily managed. The Loma Boat Launch State Wildlife Area, located south of Loca, is a popular entry point to the Colorado River for recreational activities. Southwest of Loma, the Kokopelli Trail begins as a hiking trail that follows a route through the McInnis Canyons National Conservation Area, which covers 123,430 acres and is located south of town.