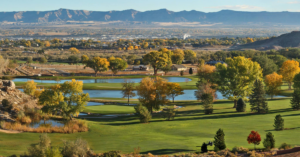 The percentage of the population in Grand Junction, CO with health insurance is just over 91.2%, with 41.5% on employment-based plans, 21.4% on Medicaid, 12.6% on Medicare, 13.2 percent on non-group policies, and 2.58 percent via military or VA plans (according to the US Census Bureau).

In Mesa County, CO, primary care physicians see 891 patients on average each year, a decrease of 1.22% from the previous year (902 patients). In comparison, dentists have 1365 annual visits and mental health practitioners 300.

What are the best neighborhoods in Grand Junction?

The Ridges, Redlands Mesa, and Paradise Hills are some of the best neighborhoods in or around Grand Junction, Colorado. Consider purchasing or leasing a property in one of these popular areas.

In Grand Junction, CO, there are 44 public schools that have been rated good or higher by GreatSchools. You can also discover 7 private and charter schools.

Grand Junction, Colorado is the largest city in the Western Slope. You’ll find all the amenities desired, with plenty of outdoor attractions including hiking, mountain biking, golf courses, gyms, lots of parks, restaurants, and plenty of places for families, couples, and singles to enjoy.